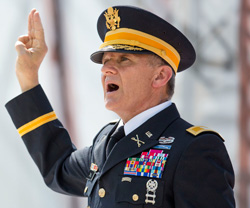 Dahl was one of our country’s best and brightest, too. He served our nation in Germany, Kosovo, Yugoslavia, Iraq and Afghanistan. And when his overseas duty ended, he served domestically as a mentor to younger soldiers transitioning back to civilian life.

Dahl’s military experience was forever changed in 2007 in Iraq when his Humvee was hit by a roadside bomb, resulting in a severe head and neck injury.

“My recovery was long and difficult, but once again my Scouting experience helped me get through it,” Dahl said in a jamboree video message you can watch below.

He was recalled to active duty after his recovery and was sent to Afghanistan in 2011. There, he suffered another injury during a rocket attack, causing more damage to his head and spine. He finished his mission and returned home in February 2012.

The time until his death was spent mentoring younger soldiers at the Warrior Transition Unit at Fort Benning in Georgia. And, of course, he took time to visit the 2013 National Jamboree at the Summit to address the next generation of American leaders.

Through it all, Dahl recognized the value Scouting had in his journey toward becoming a real-life hero.

Dahl died on Aug. 1, 2014, and will soon be laid to rest at Arlington National Cemetery. Before his passing, he left behind a note, given to his wife with instructions to share with friends after he died.

That note has circulated among jamboree staff members and was sent to me by my Scouting friend Patrick Adams. I’ve included it below.

These are impassioned, powerful words from a man whose character was forged in Scouting and tested on the battlefields. His bravery, loyalty and honor will never be forgotten.

On Friday, August 1, at approximately 1:45 pm, I took my final step on my personal hiking trail. I have one more short trip to make to where I will pitch my tent for the last time and rest beside my final campfire. That campground will be at Arlington National Cemetery.

All in all, my trail has been fairly level with only gentle slopes and good weather for most of its length. That is not to say that there have not been some hard climbs and some rough weather, but I would be hard pressed to complain about it. I just thought that there would have been a few more miles to have travelled.

I want to thank all of you that I have met along that trail for the friendship and kindness that you have shown. Those are the things that have made my hike so enjoyable. I hope that I have shown the same measure of kindness and friendship to you, as well.

I also want to thank all of you for the kind words and messages that you have shared with me over these past few months. It has done me well to receive them from you, as well as, to have reconnected with those of you that I have drifted apart from. I want to thank those of you that sent my messages to those that I had drifted from. You did a great service to me by letting those people know about my situation. I have often said, that it is all about people helping people and you have shown that to be the case one more time for me.

Other than that, there is not too much else to say. All in all, life has been pretty fair and I can say, in all honesty, that I have enjoyed it and tried to live every moment to its fullest. My advice to all of you would be to do the same, embrace those around you, stay in contact with those you consider to be friends and don’t be afraid to tell those around you how you feel about them. As I have so recently found out, life is shorter than we think it will be. I have been fortunate that I had some advance notice of when my time would be ending and it has enabled me to reach out and contact all of you. Not all of us will be that fortunate. So I guess what I am saying is do not wait until the last minute to say hello to people that you might want to.

I have been blessed to have known the love of my wife of more than 25 years, Lisa and the joy of my children of over 20 years, Ashley and of over 18 years, Larry. They have stood like a rock in my support during this time of trial and tribulation.

Since becoming a Cub Scout at a young age and going through Boy Scouts, then serving as an adult Scout Leader and even as recent as the July 2013 Boy Scout National Jamboree, I have tried to live by the Scout Oath and the Scout Law both in how I carried myself personally and publically.

“On my honor, I will do my best
To do my duty to God and my country and to obey the Scout Law;
To help other people at all times;
To keep myself physically strong, mentally awake and morally straight.”

and the Scout Law which reads:

Now it is time to draw this note to a close and say my final farewell to all of you. Once again, thanks again for the friendship and if you have an occasional thought about me I hope it is a good thought.

Best Wishes and good luck to all.