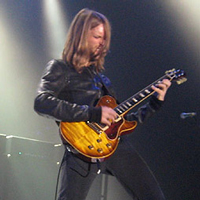 This week I learned James Valentine, guitarist for the Grammy-winning band Maroon 5, is an Eagle Scout.

Valentine earned the Eagle Scout award in 1996 as a member of Troop 672 in the Cornhusker Council, based in Lincoln, Neb. He was a member of the LDS church, served as his high school’s student council president and played in the youth orchestra and jazz band. He was the guitarist for several bands before joining Maroon 5, which released its debut album, Songs About Jane, in 2002.

You probably know all about Maroon 5, the band behind No. 1 hits like “Moves Like Jagger,” “One More Night” and “Makes Me Wonder.” These days Valentine, lead singer Adam Levine and the rest of Maroon 5 are bigger than ever. They’re about to go on tour to support their latest album, V.

By the way, I’ve reached out to Maroon 5’s publicist to try to land an interview with Valentine. Expect more if I hear back.

In the meantime, watch this video of Valentine teaching fans how to play “She Will Be Loved” on the guitar. He’s giving back to others by sharing his musical gifts in a way that lets others benefit.

In other words: He’s still doing good turns, even as a rock star.

Some other famous Eagle Scouts I’ve blogged about