Still deciding which team to cheer for in the 2014 World Series?

Here’s a fact that might sway you: Jeremy Guthrie, tonight’s starter for the Kansas City Royals, is an Eagle Scout.

With all due respect to Tim Hudson and the San Francisco Giants, that’s reason enough for an impartial baseball fan like me to cheer for the team in royal blue tonight. Game 3 airs at 8 p.m. Eastern on Fox.

There’s something about Kansas City and Scouting, it seems.

Earlier this week I told you that Kauffman Stadium in Kansas City, where World Series Games 1 and 2 were played, is named for an Eagle Scout. There’s also this awesome Eagle Scout fountain in the city. And Scouter S. Craig Hufford shared that the Kansas City Chiefs were named after the Heart of America Council’s former Scout Executive, Harold Roe Bartle.

But tonight’s all about Guthrie, an accomplished pitcher with almost 1,000 strikeouts in his career.

The right-hander from Roseburg, Ore., earned his Eagle Scout award on May 20, 1997. And in April of this year his career accomplishments were recognized during the Heart of America council’s fifth-annual Scout Day at the K.

Scout Day at the K 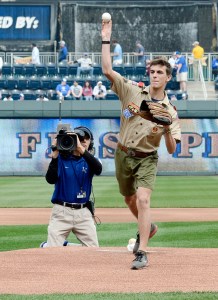 The award honored not only Guthrie’s career but his continued strong character and dedication to the Scouting program.

Also worth mentioning is who threw out the first pitch that day. It was Alex Houston, the Eagle Scout Antarctic explorer. (You can read all about Alex’s Antarctica trip in the November issue of Boys’ Life, Boy Scout edition.)

It must have been quite the thrill for Alex to get to throw out the first pitch and meet Guthrie.

But judging from Guthrie’s smile below, I’m betting he was just as thrilled to meet Alex. 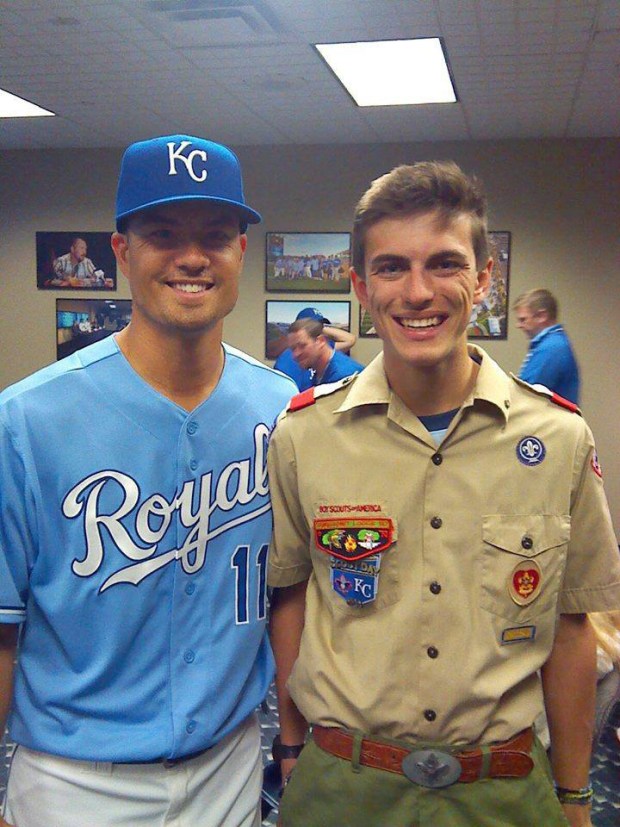