In June, Venturing Crew 310 from Seattle attempted to summit Mount McKinley. Though high winds and an avalanche risk scrubbed their attempt, it didn’t dampen their spirit of adventure.

Read the story in their words below.

But first, let me point out that Crew 310′s chartered organization is unlike any I had seen before. The crew is chartered to Cascade Leadership Challenge, a Seattle-based nonprofit that helps youth get more outdoor adventure in their lives. Cascade Leadership Challenge actually charters three Venturing crews, including one through the BSA’s Scoutreach program that serves inner-city youth. Now that’s a great link-up between Scouting and one city’s vast community of outdoor adventure enthusiasts. 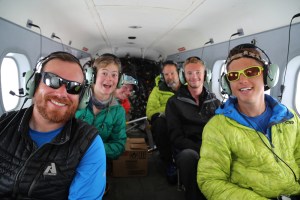 Nestled in the Alaskan interior, Denali, also known as Mount McKinley, is a place of extremes. At 20,237 feet, it is the tallest mountain in the United States and in North America. Thanks to its immense size and unique location near the Arctic Circle, Denali’s weather can change in an instant and extremely cold temperatures accompany climbers even at the height of nightless summer.

One of the Seven Summits, Denali is considered one of the most difficult mountains in the world and a challenge to even the most seasoned mountaineers.

In June, four youth and three adults from Seattle’s Crew 310 answered Denali’s call. An adventurous group, the crew and their charter organization, Cascade Leadership Challenge (CLC) have spent the past six years been backpacking, rafting, rock climbing, and mountaineering throughout the Pacific Northwest.

With summits of the Cascade stratovolcanoes under their belts, including Mount Rainier, the crew set their sights higher and began planning their trip to the Alaska Range. 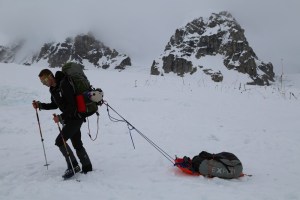 During a year of preparation, the team worked to fundraise, build community connections, and get ready for the biggest trip of their lives. Drawing on the expertise of the Seattle climbing community, they sought out advice on everything from itinerary to menus.

They secured prodeals on equipment from local outdoor manufacturers and retailers. In March, they held a benefit auction that raised nearly $40,000 for the expedition and other youth programs. In the months leading up to the expedition, the team also built an intensive skills development program of winter camping, technical rock and alpine climbing, wilderness ethics, backcountry medicine, and physical conditioning.

Arriving in Anchorage between June 12 and June 14, the team packed food and prepared gear before driving to the small town of Talkeetna. From there they flew to Denali by bush plane and landed on the glacier, beginning 17 unforgettable days on the mountain. 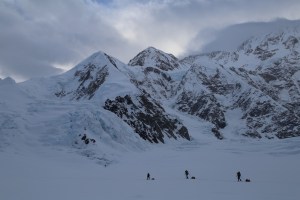 Even though the team followed the popular West Buttress route, used by over 90 percent of all Denali climbers, the trek was far from easy. To ascend safely and acclimate to the altitude, the team slowly worked their way up the mountain. Following the philosophy of “climb high, sleep low,” the team followed a cycle of ascending to place a cache of food and equipment, moving to the next camp, and then descending to retrieve the cache.

The first days were the hardest; each expedition member hauled a sled on snowshoes while carrying a full pack. 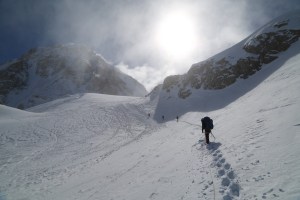 During their time on Denali, the team witnessed avalanches, weathered blizzards, and met colorful mountaineers from around the world. Occasional breaks in the weather afforded stunning views of the mountain and of the surrounding Alaska lowlands.

At 14,200 feet the team experienced one of the worst storms of the season, which brought high winds and buried their camp under 6 feet of snow in 36 hours. Facing unacceptable avalanche danger on the high mountain and running out of time, the group made the unanimous decision to retreat. Disappointed not to be going further but proud of what they had managed to accomplish, the team flew back to Talkeetna and returned home to Seattle on July 2. 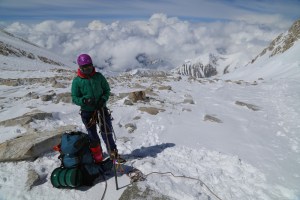 Not reaching the summit of Denali has done little to curb the team’s enthusiasm for mountaineering. For 2015, Crew 310 and CLC are developing a program called the Everest Experience with the dual aim of sending a team of mountaineers to Nepal and enabling 100 teenagers to summit of Mt. Rainer.

In 2016 the crew will head to Ecuador and the Galapagos Islands. And one of these years, there just might be another expedition to Alaska.

H/T: Thanks to Western Region Venturing President Edward Abraham for the story tip!