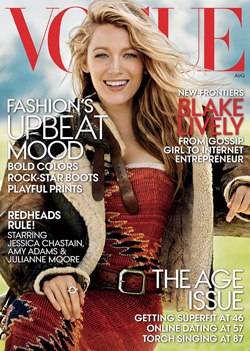 You’ll find positive mentions of Eagle Scouts all over newspapers and TV.

But one place I wasn’t expecting to see a reference to Scouting’s highest honor was in Vogue magazine.

I’m not a regular reader of the monthly fashion magazine, but 1.3 million people, mostly women, pick up each issue.

A Scouter told me to check out the August 2014 issue for something noteworthy. And sure enough, I found it on Page 96.

The article is written by Joyce Maynard, who also penned the novel Labor Day, which became a movie starring Kate Winslet and Josh Brolin last year.

Maynard tells the true story about her own perilous quest to find love in her late 50s. Finally, she meets the perfect guy, and, yep, he’s an Eagle Scout. She writes:

” … I met Jim — divorced, like me, for nearly a quarter century. An attorney — handsome, in possession of all his hair — with surprising interests in astronomy, environmental politics, good fiction, playing the electric bass, camping in the California desert, jazz as well as opera, and motorcycles. He was a political liberal and an Eagle Scout.”

What strikes me most about Maynard’s article is how she said so much about Barringer in just two words: Eagle Scout.

She didn’t need to include a paragraph on his character, saying how he’s loyal and kind and courteous and friendly. Instead, like any good writer, she boiled that down to two key words.

What does ‘Eagle Scout’ imply?

A picture’s worth a thousand words, and the same can be said about the phrase “Eagle Scout.”

When Maynard or others say someone’s an Eagle Scout, what are they revealing about that person? When a college admissions officer or hiring manager sees “Eagle Scout” on an applicant’s résumé, what’s the hidden meaning there? What do those two words say to you?

I’m interested to read your thoughts in the comments.

You tell me: How would you define the term ‘Eagle Scout’?