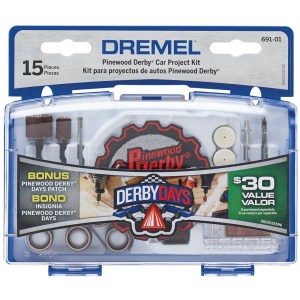 On four selected Saturdays over the next two months, your local Lowe’s store is hosting a free Pinewood Derby car clinic where you and your Scouts will learn how to make the fastest, best-looking racer your town’s ever seen.

When are the clinics?

The Dremel Pinewood Derby Days clinics will be held on these Saturdays in 2015:

Call your local store or ask a store associate to double-check that your local Lowe’s is hosting a Derby Days event.

What do you get for attending?

Everyone who attends the free clinic gets:

What if I can’t attend?

That’s where you’ll find Dremel accessories to use when building your car.

Greg Winters, who heads up the BSA’s licensing team, tells me there’s a secondary bonus to those Pinewood Derby displays at Lowe’s.

“It might be a chance to reconnect with alumni,” he says. “They might be walking the aisles, it reignites in them, ‘Oh my gosh, I remember Pinewood Derby when I was a kid.’ And it’s something they can do with their son or daughter.”

Where else can I buy Pinewood Derby stuff?

At your local Scout Shop or at ScoutStuff.org, of course. While at your Scout Shop, be sure to ask about Champ Camp on Jan. 17 or Jan. 24.

It’s pretty simple: If a product says Pinewood Derby® on the label, you know it’s officially licensed by the Boy Scouts of America.