Included on the list of Men’s Journal‘s “22 Greatest Record-Breaking Feats of 2014” you’ll find two Eagle Scouts. And why not? They’ve conquered Scouting’s toughest challenge, so conquering the world’s highest mountains or deepest caves must feel natural to these guys. 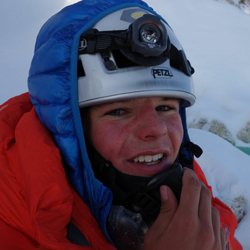 “The Feat: On May 25, Matt Moniz, a 16-year-old Eagle Scout, became the youngest person to summit 27,766-foot Makalu, the fifth tallest mountain in the world. And he did it one week after summiting 26,905-foot Cho Oyu, the sixth tallest. The back-to-back peak bag was actually Plan B — Moniz and his father Mike, also an accomplished mountaineer, were originally in the Himalayas to summit Everest, along with Cho Oyu, and Lhoste, an expedition they dubbed ‘The Triple 8,’ referring to the three eight-meter peaks. But the deadly April 18 avalanche on Everest forced them to choose another mountain.”

Matt’s accomplishments belong on the list even if he was 26 or 36, but to do it all at just 16? Insanely awesome.

This goes without saying, but I’ll say it anyway: This won’t be the last we hear from Matt Moniz.