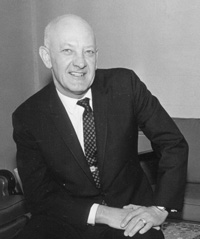 Only one ballpark in the American League is named after a person.

And it turns out that Ewing Kauffman, the man who started the Kansas City Royals and for whom the team’s stadium is named, was an Eagle Scout.

The Royals host Game 1 of the World Series — at Kauffman Stadium — tonight on Fox.

Ewing Marion Kauffman, born in 1916 in Missouri, earned the Eagle Scout award on Nov. 6, 1931. After a successful career in the pharmaceutical industry, establishing a professional baseball team and his myriad philanthropic efforts, it was an obvious decision to name Kauffman a Distinguished Eagle Scout in 1977.

Kauffman died in 1993, and the Royals never made the postseason again after that 1985 World Series win. That is, until this year.

Bringing baseball back to K.C.

When the Athletics franchise moved to Kansas City in 1955, the man responsible, Chicago real estate tycoon Arnold Johnson, was hailed as a hero.

That feeling didn’t last — and neither did the Athletics’ stint in Kansas City. The team moved to its current home in Oakland, Calif., after the 1967 season.

That upset U.S. Sen. Stuart Symington, who threatened to remove baseball’s antitrust exemption unless Kansas City was granted a team in the next round of MLB expansion.

Kauffman won the bidding for the new Kansas City franchise. He named the team the Royals after the American Royal, a horse show held each year in Kansas City.

The team played in the multipurpose Municipal Stadium for the 1969 through 1972 seasons before opening Royals Stadium in 1973. Royals Stadium stood out at the time because it was one of the few single-sport stadiums around, bucking the trend of one-size-fits-all stadiums that housed multiple teams.

In 1993, Royals Stadium became Kauffman Stadium in honor of the Royals’ founder.

And now, for the first time in 29 years, Kauffman Stadium is home to the American League Champions.

Hat tip: Thanks to Mark Blanken of Troop 165 for the blog idea!