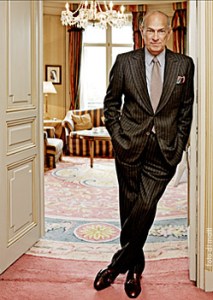 Oscar de la Renta, the renowned fashion designer who reimagined the official Scout uniform into a look that became synonymous with Scouting, has died. He was 82.

De la Renta’s design for the Scout uniform debuted in 1980 and was the official uniform for nearly three decades. That means his design was worn by millions of boys, girls and adults through the years.

De la Renta worked with BSA leaders for two years on the design. And the result was much more than just a new look. It represented an important shift for the organization from the military-centric uniform of the past to the tan-on-olive look still in use today.

Of course, de la Renta wasn’t best known for his work with the Boy Scouts of America. He designed clothes for luminaries like Jacqueline Kennedy, Laura Bush, Michelle Obama, Taylor Swift and Amy Adams. Most recently, he made headlines for designing the gown worn by Amal Alamuddin for her wedding to George Clooney.

But in Scouting circles, de la Renta will be remembered for his groundbreaking redesign of the Scout uniform. It was the organization’s most complete overhaul in nearly 60 years.

“We felt the uniform should meet several criteria,” de la Renta told Scouting magazine in our September 1980 issue. (Read the full story below.) “It should be suitable for strenuous activity; it should be made from an easy care fabric; and at the same time the wearer should still look like a Scout.”

De la Renta’s first big change was to the color scheme of the Boy Scout uniform. He chose khaki tan shirts instead of khaki green ones. The shirts were given collars that could be worn normally or turned under for use with de la Renta-designed neckerchiefs.

Epaulet shoulder tabs were added, revealing the wearer’s program at a glance: red for Boy Scouting, blue for Cub Scouting and green for Exploring.

Even the socks were reimagined. No more garters and tabs; the red-and-green socks had elastic cuffs designed to keep them up.

Cub Scouts got uniforms that looked a lot like the new Boy Scout ones, but in navy blue. And female Scouters were given a range of blouses, skirts, shorts and scarves in the appropriate program colors.

The fabric of it all — polyester and cotton — was made to be durable, stain-resistant and easier to care for. All while looking sharp.

But in fashion, no design lasts forever.

In 2008, 28 years after de la Renta’s design was introduced, the BSA released its Centennial Boy Scout uniform. That’s the uniform design still in use today.

(Important note: A uniform never becomes “unauthorized” for wear. Any uniform that was ever official is still official today, including those from the “de la Renta years.”)

The Centennial uniform used quick-drying fabric made to be worn in the elements. Though de la Renta said one of his goals was to create a uniform “suitable for strenuous activity,” many Scouts felt his design was better suited for just standing around.

The redesign also overhauled the color scheme de la Renta had created. Instead of lots of reds and bright colors, the new Boy Scout uniform had a more subdued color palette. Epaulets, troop numbers, socks and the official Scout hat were stripped of red in favor of forest green.

Even the webbed Scout belt got a change: The shiny brass gave way to metallic gray.

Still, traces of de la Renta’s work remain in today’s Centennial uniform. He’ll forever be remembered for creating the foundation on which today’s uniforms are built. 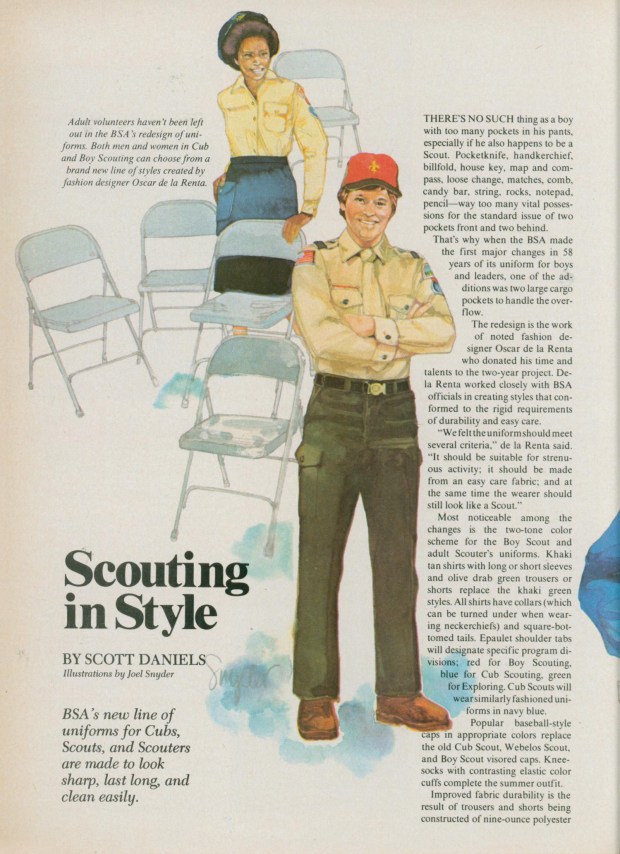 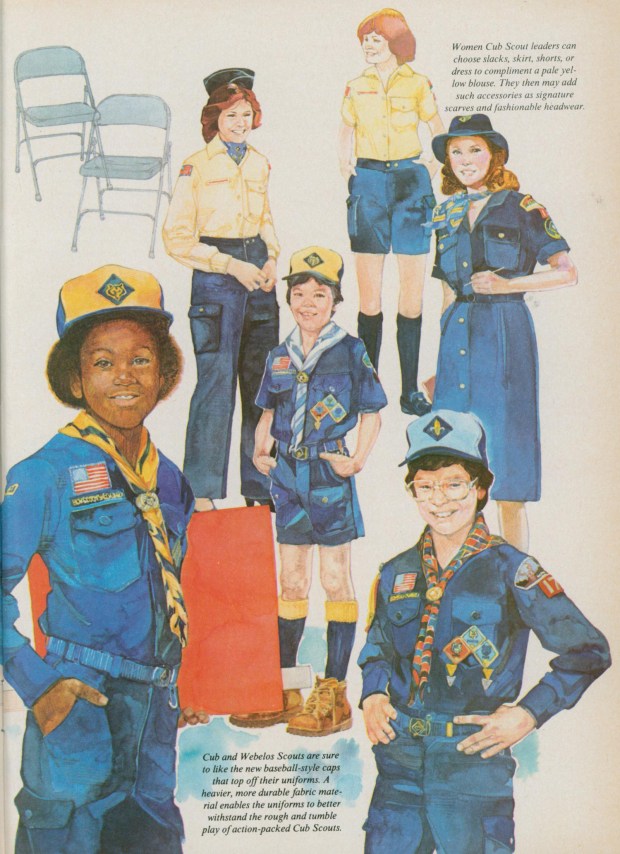 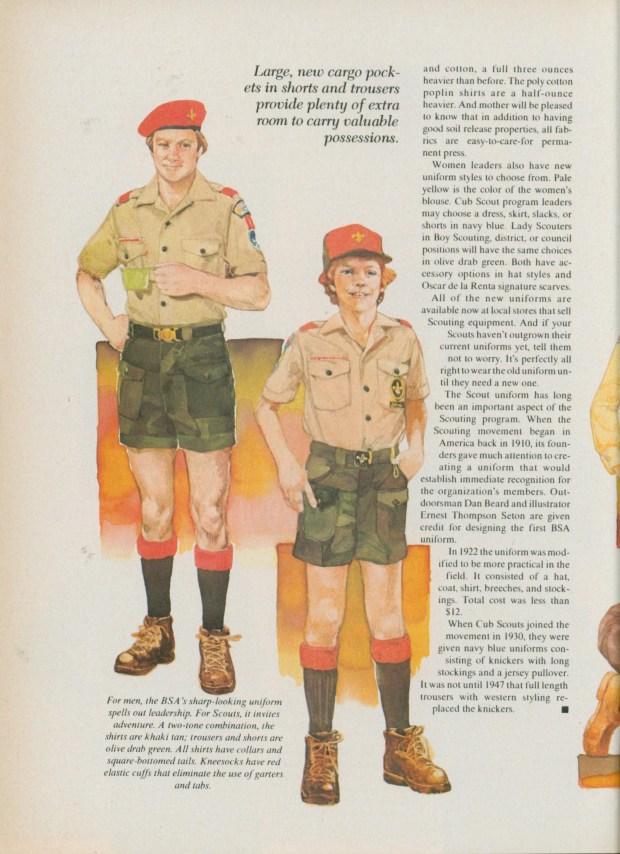 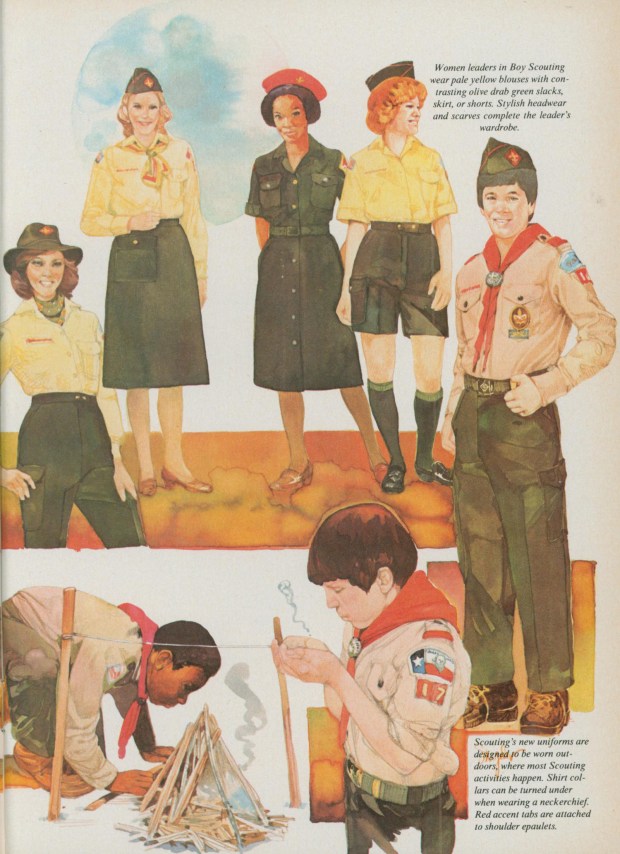